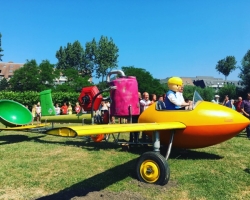 In seaside resort Middelkerke (Belgium) an unusual piece of art was presented to the public on the 19th of June. ‘De Straalvogel’ (the ‘Bird jet’) features in one of Belgium’s most popular comic strip series ‘Jommeke’ (Jeremy and Franky). In the most recent album of the series (n° 268) the memory of Jommeke’s self-made airplane used in album ‘De Straalvogel’ (1962) was brought up. To celebrate this, visual artists Tardioli-Cauwenberghs created a real life sculpture of the airplane in the municipal park of Middelkerke. Like in the album it is completely made of waste materials. The album will be used to raise awareness concerning waste and circular economy. Aerocircular® helped in providing original airplane parts such as wings and wheels to give it a realistic look and feel. You can visit it in Middelkerke, in the park at the Normandlaan.

Link to the item on regional TV Focus-WTV

The last Fokker 50 has left the Antwerp International Airport today.…

Aerocircular has engaged MVC-architects to manage the building process of its infrastructure.

"Circular economy" wins steadily in popularity. Not just because sustainability is the next big thing, but…